Using a UV counterfeit currency detector has numerous advantages to a business. These devices are among the least expensive security solutions to aid in combatting counterfeit fraud. The devices are easy to use: since they are human-readable, employees need only to place a bill underneath the UV light and identify the glowing security feature to confirm that it is a valid U.S. bill.

But some businesses remain reluctant to adopt UV security screening because it relies on the transaction-level employee — cashiers and tellers, namely — to conduct the screening of currency. The thinking of some business managers is that, due to intentional oversights or poor training, it is possible for counterfeited bills to go undetected. They believe that it is too difficult for the employee to accurately identify a counterfeit bill.

And while replicating the UV security features in currency is difficult, it isn’t impossible, meaning that some bills that pass the security test could still be counterfeit.

Spectra from 400-565nm. Instrument parameters were as follows:

Representative scans of the security threads 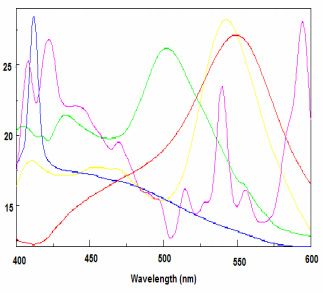