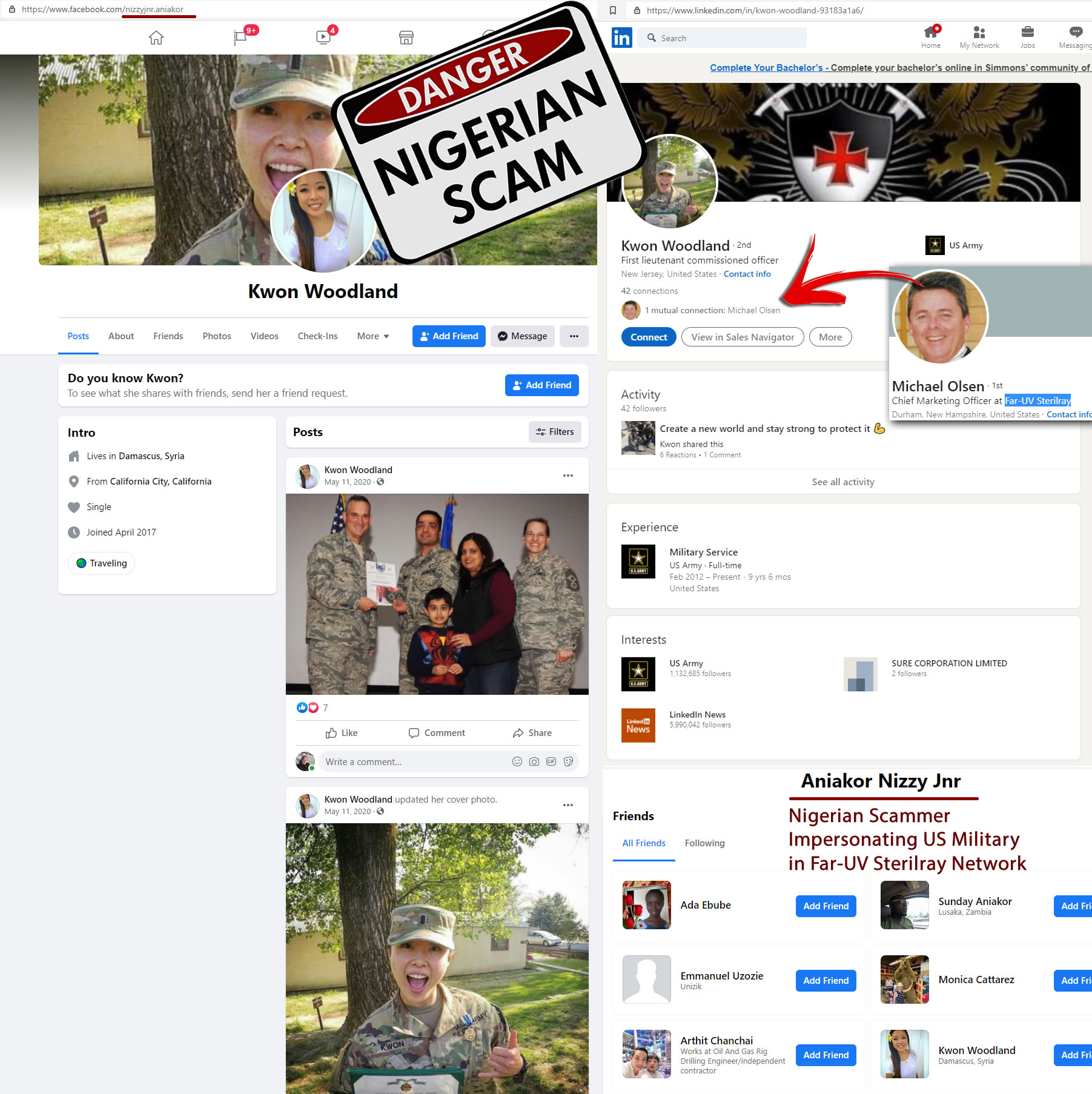 Linkedin can only be a haven for scammers if you allow them to join your professional network! So be very cautious doing business with any business that can’t spot a Nigerian scammer impersonating commissioned US military personnel from a mile away.

To allow such a blatant scammer to join your network shows not only a lack of respect for other LinkedIn members by allowing a scammer to seed themselves into a network, especially the self-proclaimed leaders/patent holders for Far-UVC 222nm lighting.

222nm patent claims are a different scam altogether as these style lamps producing 222nm peak emissions we not invented in the USA in Jan 2005 as those at Far-UV Sterilray want you to believe. If you believe that hogwash, you might believe that the Nigerian Scammer connected to Far-UV Sterilray is really a First Lieutenant commissioned military officer in Michael Olsen LinkedIn network – Chief Marketing Officer at Far-UV Sterilray!

If you look a little deeper than the USPTO did, you will find these Far-UVC lamps were patented in the USA after being invented for commercial use in Russia and other parts of the world almost a decade before.

The Far-UVC light patent lawsuits perpetrated by Far-UV Sterilray are on orders of magnitude more harmful to the American people than a Nigerian scammer impersonating active duty US military!

So when someone requests a connection with the only common person who works for Far-UV Sterilray, who is suing several companies in court over selling Americans a true first line of defense (Far-UVC Light) against bio-agents. I get a little suspicious why anyone would connect with me when Far-UV Sterilray is the only company we have in common.

To be clear, I remain connected to Far-UV Sterilray members so they are reminded of the power of free speech and the reason I wouldn’t sign an NDA with them to buy a Far-UVC light bulb. Yes, you heard me right, twice they wanted me to sign an NDA to buy a light bulb that can save lives.

I want them to know firsthand the disdain I have towards them for pulling the wool over the eyes of the USPTO and impeding FAR-UVC innovation that will cost American lives.

This is just a warning to be careful if you connect to the Far-UV Sterilray network. It’s worst than the dark web because terrible people (worst than Nigerian scammers) are in Far-UV Sterilray’s network that would rather see you die unless they receive undeserved patent fees to provide protection the American people need; to survive a pandemic crisis!

Mom always said that birds of a feather flock together!

LinkedIn provides proof that scammers flock together exactly where you would expect to find them – with scammers!

Great weapon if it is a human or animal attacking you.

When bio-agents are released, armor-piercing rounds are worthless. If the US Government wants Americans to be able to protect themselves and use the best first-line of defense, then they would stop companies that are blocking the ability to buy the weapons needed to win the war on flu!

Photons are the bullets needed today; 222 nm rounds and people you are connected with want to control our best defense against nano-sized invaders.

I’m glad you have the firepower to protect yourself in the macroscopic world. But, unfortunately, while the rest of America is in a life-and-death microscopic war, Americans are totally denied the light-based technology weapons needed to regain our territorial advantage to fight this bio-agent causing our loved ones to die alone.

Freedom over tyranny! God Bless America! As Trump once said, hit the body with “very powerful light”, he was right, but this method of human-safe Far-UVC light is being blocked.

No different than if someone took your guns away! Misuse of USPTO patent laws and blatant violations of antitrust laws are KILLING Americans! Corporate terrorists are in your circle! The corporate world of good people will fight back!