Skip to content
Your Content Goes Herehttps://www.quantadose.com/wp-content/uploads/2016/11/photo-1441260038675-7329ab4cc264.jpgWhy is the best way to end/prevent a pandemic silent in the media and trapped in USA courtrooms?

Far UV pandemic countermeasures can not even be advertised without threats of litigation when all we want is the freedom of speech to Advertise for building awareness that there is a better way than vaccines or eroding our freedoms by regaining our territorial advantage with clean air indoors using human-safe Far UV technology that was invented long before wrongfully patented in the USA as a novel invention.

The Neisters Have A Patent For What?

High Energy Ozone LLC aka The Neisters, which goes by the name Far-UV Sterilray, deceitfully withheld this information from the USPTO. Inequitable conduct by standards of US patent law for not disclosing “prior art” of 222nm Peak KrCl Excilamps that previously demonstrated strong germicidal capabilities made public at a major conference in 2003. 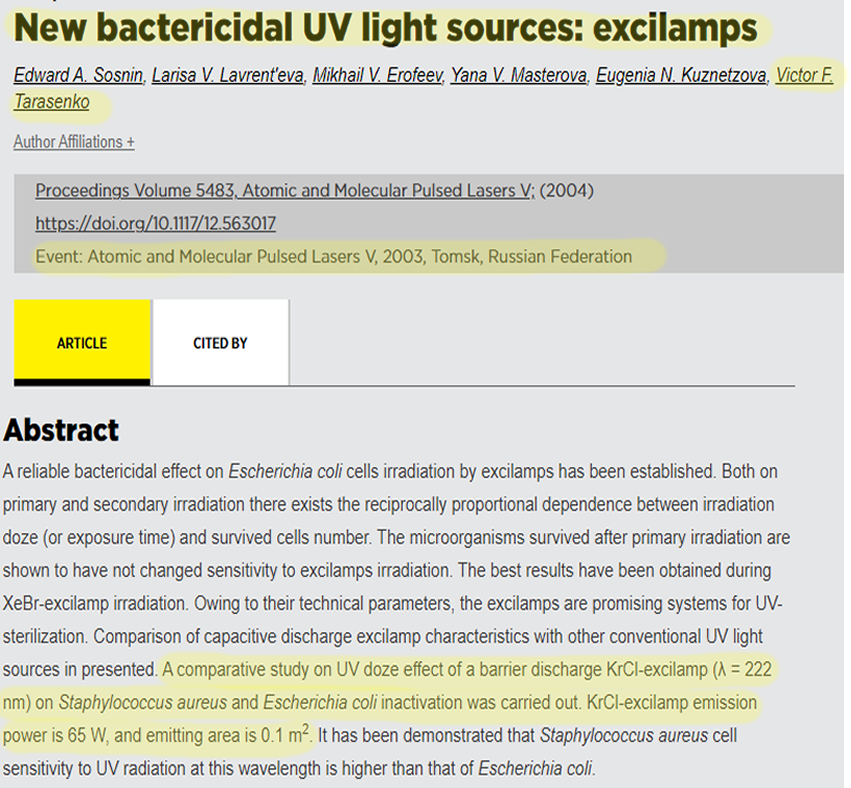 Bestdealon.com along with its affiliated websites has a right to advertise where Far UVC pandemic fighting technology, KrCl Excilamps can be procured using its innovative “ad concierge service” amounting to product question and answer AI bot training data service for providing customer service as part of “full product advertising” through bestdealon.com affiliated sites.

Prior art for the technology advertised on affiliated sites is openly available for anyone to see the Far UV products advertised through bestdealon.com are not subject to censorship and any affiliate managing an ad for products and services requiring regulatory compliance are also in compliance with such regulations to best protect end consumers, Example regulations include EPA registration for Company and Est No to do business with businesses implementing Far UVC technology Prior art Example 1. General view of a KrCl-excilamp of a barrier discharge with an average radiation power of 50 W (tests in the laboratory of optical radiation of the Institute of High-Current Electronics SB RAS, 2002) 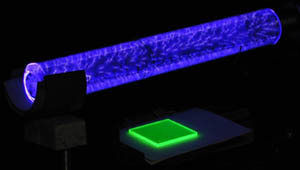 It was 2003 at an event in Tomsk, Russian Federation that Victor F. Tarasenko first referred to KrCl excimer lamps as providing a “New bactericidal UV” at an event for Atomic and Molecular Pulsed Lasers conference volume: 5483 September 15-19, 2003

Online sources claim Ed Neister is a laser scientist, so it is only logical that he would have been exposed to Prof. Victor Tarasenko’s scientific work published from the Atomic and Molecular Pulsed Lasers event where Prof. Victor Tarasenko announced his breakthrough “New UV” discovery for germicidal applications using KrCl lamps designed at the Institute of High Current Electronics, Russian Academy of Sciences.

The dates of Prof. Victor Tarasenko’s publications, images of KrCl excimer lamps, and Neister’s wrongfully summited patent applications prove that the Neister’s filed for a patent many years after KrCl lamps were invented in Russia.

These dates also clearly prove KrCl lamps were also tested for germicidal effectiveness and results published in Journals by Prof. Victor Tarasenko before the Neisters filed their false USA patent claim of novelty on well-known Russian innovations taking place at the Institute of High Current Electronics, Russian Academy of Sciences.

The neister’s are blatantly guilty of inequitable conduct, a breach of a patent applicant’s duty of candor and good faith during patent prosecution by misrepresenting and omitting material information with the specific intent to deceive the United States Patent and Trademark Office. 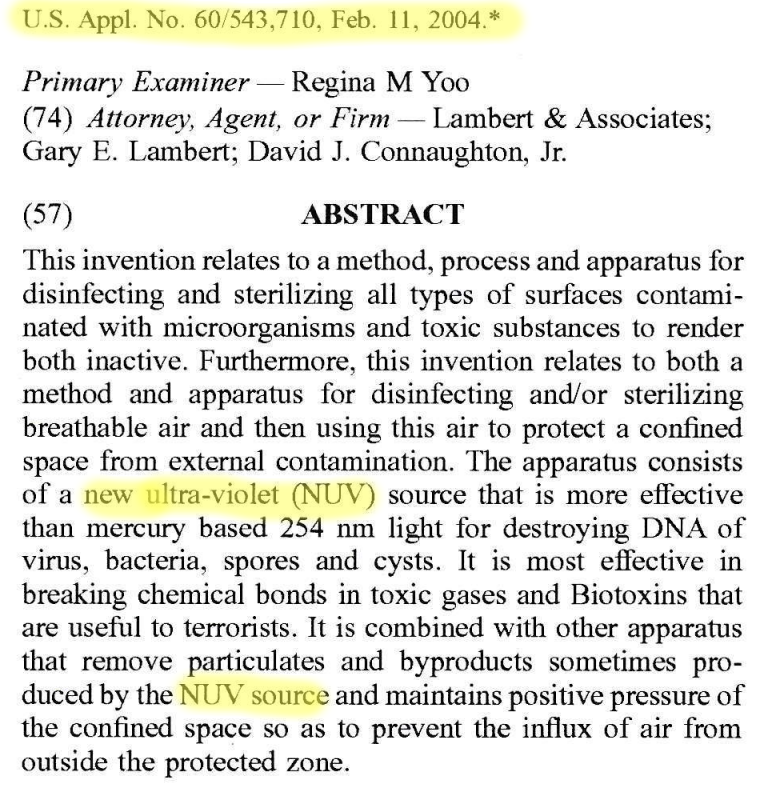 The neister’s have deceitfully claimed to have made a novel discovery using KrCl excimer technology. Not only did the Niesters wrongfully covet Russian advancements in “New bactericidal UV” light sources, New UV.
The terminology “new ultra-violet (NUV) source” as stated in the neister’s US patent US9700642B plagiarizes even the terminology used in their patent from the true inventor of KrCl excimer lamp technology, Victor F. Tarasenkon.

Again, It is apparent that John Neister brother, Ed Neister is a laser scientist, so it is only logical that he would have been privy to Prof. Victor Tarasenko’s scientific work published from the Atomic and Molecular Pulsed Lasers event in Sept 2003 where Prof. Victor Tarasenko announced his breakthrough as a New UV discovery for germicidal applications using KrCl lamps designed at the Institute of High Current Electronics, Russian Academy of Sciences many years before.

Why am I bullied out of protecting people during the pandemic?

I am complying with all government regulations. It is the government’s JOB to enforce the law to protect the American people!

SLAPPing Patent Trolls: What Anti-trolling Legislation Can Learn from the Anti-SLAPP Movement

Legislation has been passed, aimed at curbing bad faith patent assertions. To the extent that this “antitrolling” legislation seeks to detect and deter frivolous claims.

No one on earth can deny that the dates of Prof. Victor Tarasenko’s publications, images of KrCl excimer lamps, and Neister’s wrongfully summited patent applications prove that the Neister’s filed for a patent many years after KrCl lamps were invented in Russia.

The use of Far UV, and the discovery of its germicidal effectives predates the Niesters false USA patent claim for novelty on well-known Russian innovations. The dates of publication clearly prove KrCl lamps were also tested for germicidal effectiveness and results published in Journals by Prof. Victor Tarasenko.

The neisters greed and deception are responsible for harming America’s response to the most tragic infiltration of the air we breathe with bioagents in the same room as our loved ones.

No one can buy a Far UV light on any affiliated website such as quantadose because of the unfair aggression on USA businesses offering Far UV light.

Full product advertising provides factory-direct links to an advertising member managed site, and even these sites only have a Purchase Order button, not a Buy Button.

Bestdealon affiliate sites do not collect money for products. and the manufactures lead generation stores are located on faruv.lighting a directory running bestdealon business directory programming.

The faruv.lighting directory supports the far uv industry very targeted which was announced on linkedin over the summer of 2021. FarUV.lighting offers member managed listings as the world’s first Far UV Purchasing Portal For The Far UV Industry To Advertise Far UV Products and Services. Our goal is speeding the availability for academic research and end users world-wide to access FAR-UV pandemic prevention technology at scale 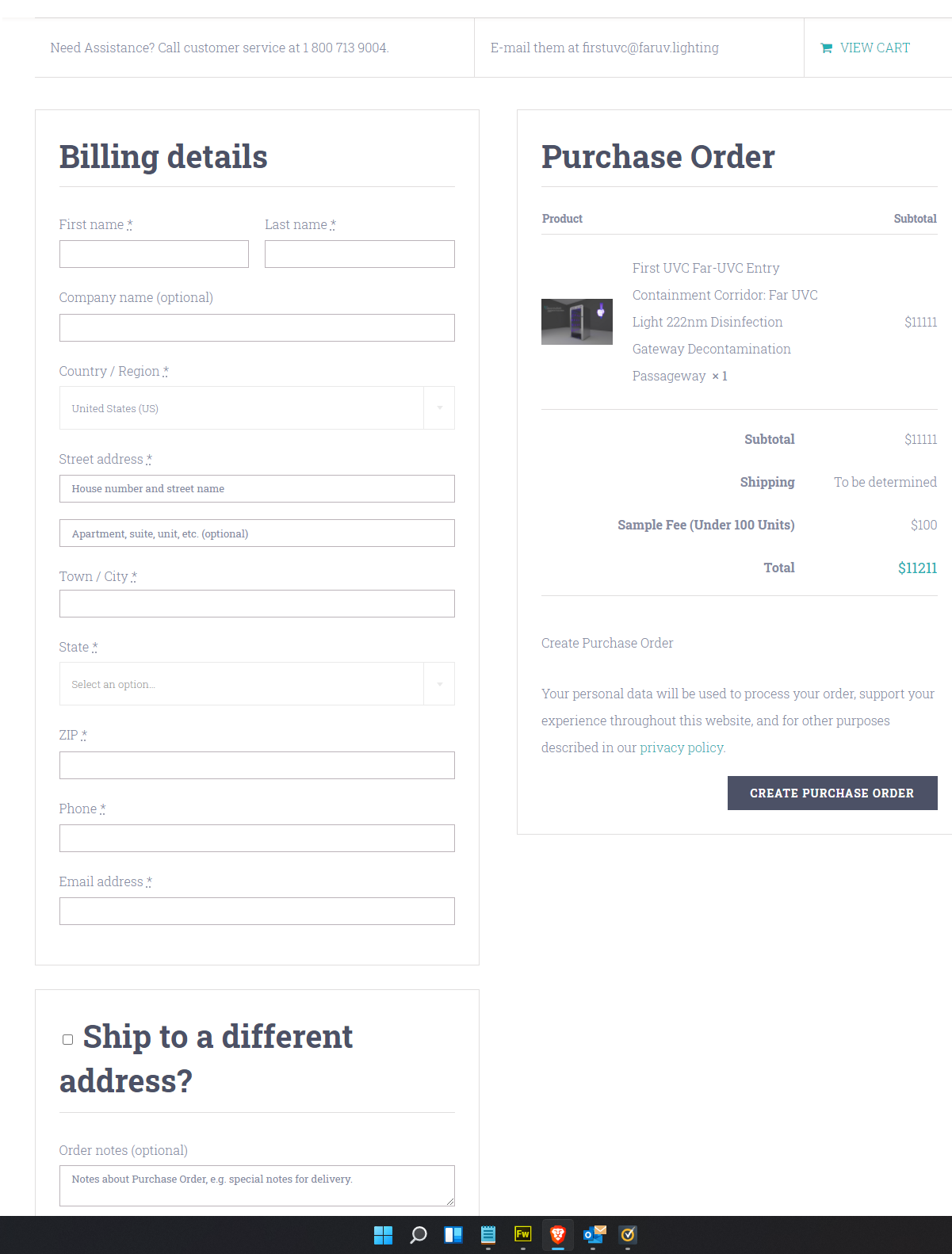 Quantadose provides a “full product ad” that links to faruv.lighting – This best deal on the advertising process must be protected by law from intimidation and unfair business. Advertising for KrCl lamp manufacturers, a technology that predates any claims of novelty by the neisters must be protected under First Amendment protections.

The existence of commercial activity, in itself, is no justification for narrowing the protection of expression secured by the First Amendment.

Blackmun concluded that commercial speech, even a communication such as advertising, which merely suggests a business transaction, is protected by the First Amendment.

The Court reasoned that commercial advertising was merely ancillary to the proper performance of a business and could therefore be legislatively regulated in the public interest, much like all other business activities.

Advertising provides information and opinion, assisting individuals in making life‐affecting choices that impact their lives and those of their families.

Advertising is generally a form of advocacy, not purely the description of objective facts that require approval of a disputed patent holder claim over a seasoned technology that was not novel at the time the neisters laid claim to NUV KrCl lamps and Far UV to the USPTO.

Advertisements Are Not Offers Generally, courts do not consider advertisements offers. Instead, they are an invitation to begin negotiations. This makes practical sense. Consider: if advertisements were offers, someone who saw an advertisement for “Delicious Apples” could say: “I accept your offer to purchase delicious apples, and if they aren’t delicious, I’ll sue!” No one would be able to conduct business or advertise products.

The Florida Deceptive and Unfair Trade Practices Act (FDUTPA) is a strong consumer protection law. Through a successful FDUTPA claim, a business or consumer can seek financial relief for “actual damages” sustained as a result of deceptive or unjust trade practices.

FDUTPA allows “anyone aggrieved by a violation…[to] bring an action to obtain a declaratory judgment that an act or practice violates this part and to enjoin a person who has violated, is violating, or is otherwise likely to violate this part.” Fla. Stat. §501.211(1). Failure to state or prove actual damages does not affect a plaintiff’s entitlement to equitable relief under the statute. Wyndham Vacation Resorts, Inc. v. Timeshares Direct, Inc., 123 So. 3d 1149, 1152 (Fla. 5th DCA 2012). XTec, Inc. v. Hembree Consulting Servs., Inc., 183 F. Supp. 3d 1265 (S.D. Fla. 2016)

Any business being threatened by the neisters should first file a complaint with the FTC’s Bureau of Consumer Protection to stop unfair, deceptive and fraudulent business practices by collecting reports from consumers and conducting investigations, suing companies and people that break the law, developing rules to maintain a fair marketplace, and educating consumers and businesses about their rights and responsibilities.

The penalties for violating the Sherman Act can be severe. Although most enforcement actions are civil, the Sherman Act is also a criminal law, and individuals and businesses that violate it may be prosecuted by the Department of Justice.

Criminal prosecutions are typically limited to intentional and clear violations such as when competitors fix prices or get caught red-handed. The Sherman Act imposes criminal penalties of up to $100 million for a corporation and $1 million for an individual, along with up to 10 years in prison.