GET AN AIR TUBE HEADSET

WireGuards are the ideal add-on accessory to reduce RF on any headset using a wired design. Even Air-tube headsets have a wire “often in contact with your body,” and a WireGuard prevents the wire from acting as an effective high-frequency antenna!

The WireGuard suppresses radiation transferred up the headset wire to the earpiece without affecting sound quality.

[pullquote]Ferrites are used in many consumer electronics to prevent interference from disruptive electromagnetic radiation, but they have limitations. Although ferrites allow low-frequency energy to pass, ferrites have a frequency band they are designed to block. Therefore, depending on the ferrite’s core composition, a ferrite’s performance diminishes at frequencies higher than it is rated.

While even the newest LTE phones may exceed ferrite beads limitations, that same LTE 4G phone is also designed to operate on network frequencies where the ferrite is effective.   RF Safe concludes a ferrite bead’s usefulness should be likened to an analogy of sunblock.  It reduces exposure to a spectrum of radiation, but by no means will it block all the harmful waves/rays. [/pullquote]

For this reason, RF Safe suggests the most prudent avoidance of RF radiation to use an air-tube headset. That way, no wires are reaching a user’s head, and the ferrite is added protection where the wire comes in contact with a user’s torso.

“RF Safe’s ferrite bead is especially important for women that are pregnant or trying to have children when the headset wire is unshielded and comes in contact with the body,” says Coates.

The wire guard is a reusable radiation suppression clamp-on device similar to a clamshell. This device clamps over the headset wire above the plug that is inserted into the phone. It incorporates a ferrous composition-based material that interacts directly with the high-frequency energy and suppresses it effectively while allowing the voice signal to pass through to the earpiece unimpeded. The housing is a black composite manufactured using nylon resins. IT FITS ANY HEADSET!

How it works! The effect of magnetic material on a conductor.

Current flowing through a conductor creates a magnetic field around it. Transfer of energy between the current and the magnetic field is effected through the “inductance” of the conductor – for a straight wire, the self-inductance is typically 20nH per inch. Thus, placing a magnetically permeable material around the conductor increases the flux density for given field strength and increases inductance.

Using a cell phone with a hands-free headset that is NOT shielded will dramatically increase rf radiation exposure to DNA within vital organs. All studies have proven the likely hood that microwave radiation from a cell phone handset is hazardous. WireGuards help prevent the possible 300% increase in RF Exposure to the brain that can happen when not using a shielded headset!

One other major concern of using a headset for hands-free usage is where the phone itself is placed. When hands-free use requires the phone to be held near your body, proper Body Shielding must be used! (Pocket Shields & Belt Clip Shields)

1. Position headset wire just above the plug into either ‘V’ Channel.

2. Close one side over the other, verifying the wire passes through the opening on both sides and the side tabs lock.

3. To transfer to another headset, carefully open the side tabs using a small screwdriver.

Wires or cables connected/extending from electronic devices using radio waves (such as cell phones), if not shielded will emit over ambient RF radiation levels. To suppress high frequency RF radiation from interacting with sensitive electronics and biologic systems (cell phone users), we offer a line of clamp-on ferrite suppressors. Our ferrite aims to effectively shield the harmful electromagnetic fields from traveling along computers wires, electric wires and cell phone headsets wires that come in contact with your body.

Any recommended use hours, time points (periodical or continuous)?

The below spreadsheet tool can help you figure out the time necessary to be effective UVGI and when the maximum levels of safe 222nm exposure have been reached under current international standards. Far-uvc-light-222nm-irradiance-time-distance-power-calculation-tool

Who are some of QuantaDose’s clients (if this is not confidential may we ask please)?

You can find YouTube reviews (top site navigation) from everyday people to large companies using QuantaDose products. Far-UV lighting products are only now picking up steam in the marketplace, with 100% of the research done in 2020 showing 222nm as effective against viruses and safe for people when filtered of longer harmful UVC wavelengths >230nm. Far-UV hasn’t received the media attention it deserves at all! But it will, a leftover consortium from the Trump era, and believers in hitting the body with a mighty light.  The Highlanders use electromagnetic radiation in the invisible light wavelength of 222nm, deploying the shields they say are needed to protect humanity with this very powerful germicidal light. I'll share some cool pictures from a customer yesterday showing the most reflecting Far-UVC material on earth (Porex-PMR10 over 98 percent at 222nm) surrounding a 60 Watt Far-UVC excimer KrCl 222nm light bulb.   First, check out the reflectance with Porex-PMR10, unreal! 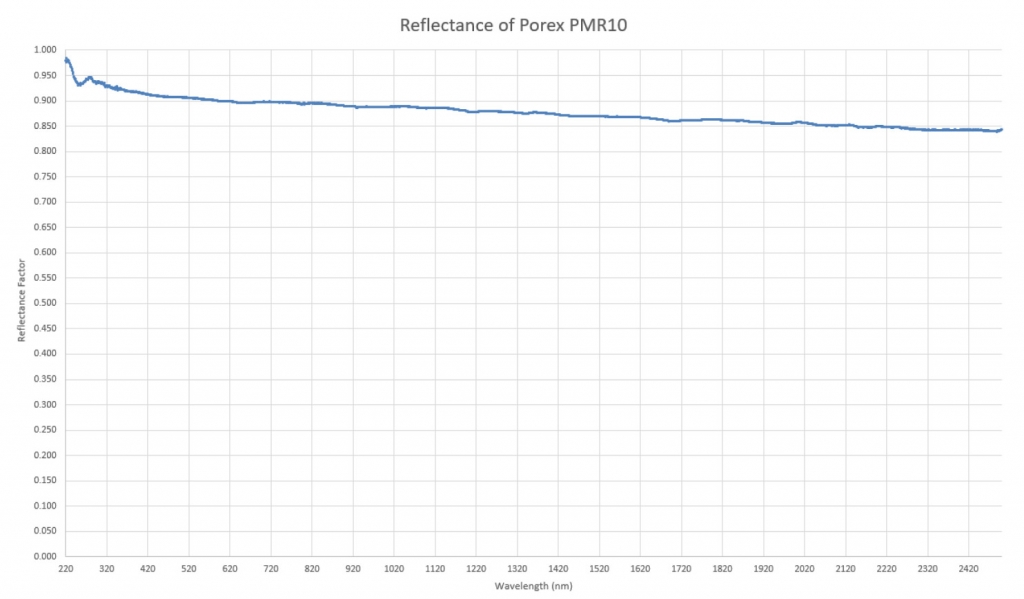 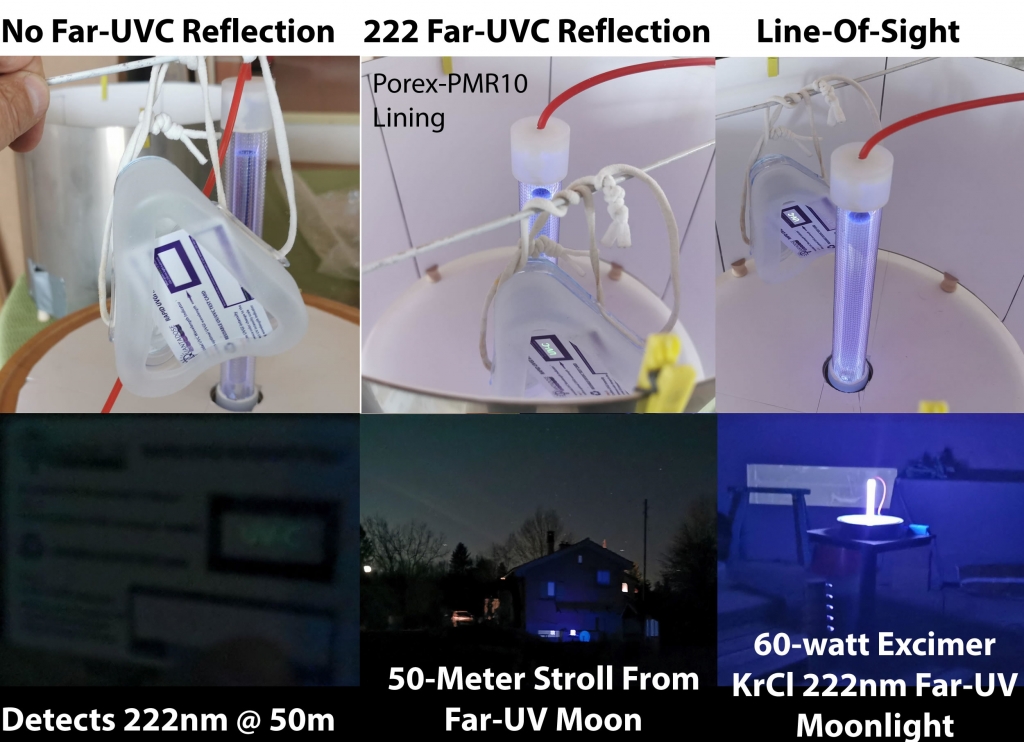 Does QuantaDose have any patents?

At QuantaDose, we have a bio-hazard we are dealing with, pushing innovation at every angle. Patents are not our focus.  Making something new better every day, not holding on to an old way, not when it can be made better exponentially in a short time.  We want everyone to build a better mousetrap! Quanta X Technology supports an open-source end to all pandemics!  Medicine can hold it off; only our intellect in combination with technology can defeat it! Beat us to the Endgame! UVGi-Fi

Can QuantaGuard use an arduino for us so that we can make changes for customers if they want?

We can support the open-source community to develop this as a solution together with minimum order requirements and R&D in this area. To use the ATmega328P microcontroller, or ARM version would take rewriting the Firmware/Software and redesigning the current circuit’s architecture. If you don’t absolutely need Arduino, you have access to the firmware via a USB programmable in C if you aren’t trying to port over something. 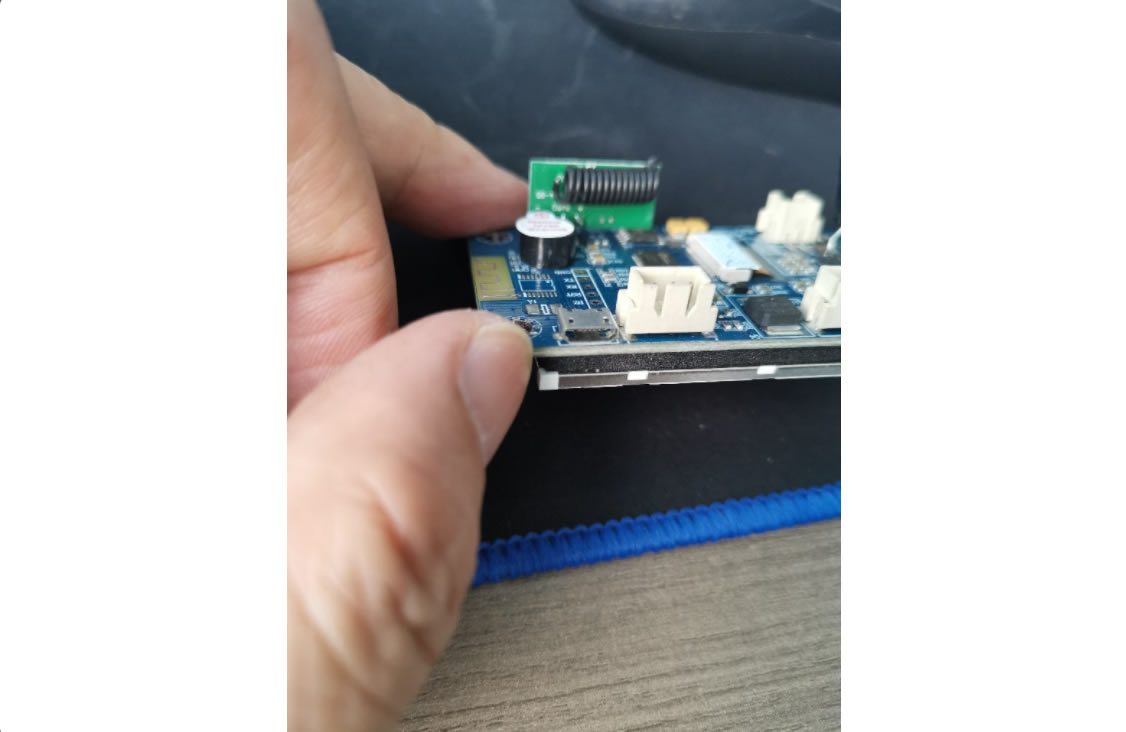 Are they all printed circuit boarded or does QuantaGuard use an arduino?

Most FAR UV production devices today have MCs on circuit boards to control functions. However, none are using Arduino for production at this time. If you’ve written your Firmware/Software on Arduino Uno to prototype light controls and functions, the ATmega328P microcontroller will allow for easy portability into a production-ready microcontroller programmable via USB.

Which microcontroller is QuantaGuard using?

That will depend on the model device being assembled. Custom microcontrollers used are programmed via a serial port protocol. However, on the fully assembled far UV light, the MC is accessible via USB.

Any safety tests done to ensure no fire, no electrocution, no chemical/physical hazards? We would love to obtain QuantaDose’s DFMEA.

QuantaDose largely offers components to build Far-UVC lighting.  Assembling these components such as power supply, ballast, and high voltage wiring must only be performed by a trained professional.  Electrician, or electrical engineer with experience in high voltage circuits.  Installation by untrained installed risk, fire, electrocution, and the most serious physical hazard - DEATH! You can expect better design failure mode, and effect analysis as the public is informed about these new technologies.  As it stands, 3 million people are dead, vaccines struggle with variants, and the worst variants may still come.  The technology used is as standard as an office ceiling lamp with a ballast.  The lighting industry has made enough light bulbs to feel good about the safety of manufacturing.   With that in mind, AP-UVGI did get rid of the poison found in legacy UVGI mercury-line bulbs. AP-UVGI devices are mercury-free Far-UVC bulbs and on many orders of magnitude safer than conventional UVGI or UR-UVGI applications. We will only build designs to the highest quality standards in an ISO cert factory to the standards of all applicable regulatory and quality control agencies. We can help attain all quality test certifications for any new Far-UVC light design you want to be manufactured using professionals in the industry.

How does QuantaDose help create and test proof of concept?

We can quickly generate prototypes with 3D printed models or an array of conventional manufacturing methods using ISO-certified environments. We can have your product design tested at ARE labs in the USA, help with the process of obtaining government and industry certifications in the USA only, and provide a strategically placed entry into the marketplace.

It does say QuantaDose’s branding team can create a full range of options for OEM products to match corporate visual identity or new prod launch, what does QuantaDose mean by this and what are some offering examples?

a. If QuantaDose does, then can QuantaDose customize XYZW: X: to moving light heads

**But still allow us to make changes on the go?

If you are paying for it, you can make as many changes on the go as you want. Min order requirements may be required depending on the changes and stage of current production.

*** What is the estimated total cost with these customized options?

You haven’t provided me any customization details or referenced a particular product for customizing. If you want to build a complete custom lamp, 100% of the specifications required, and there will be fees to complete the prototype design depending on what you are requesting as a final product.

Any tests done towards COVID? Any virus/bacteria efficiency count experiments done and what was the testing method?

Properly manufactured 222nm filteredFar UV KrCl excimer lamps produce the same Far-UVC 222nm peak. There are many studies available online using this exact filtered wavelength using KrCl excimer Far-UVC lamps. Several Far-UVC manufactures, including ours, have done third-party testing. We also provide discounts and donations to hospitals and schools to further research and awareness in this area. This information is the main topic throughout the QuantaDose.com website