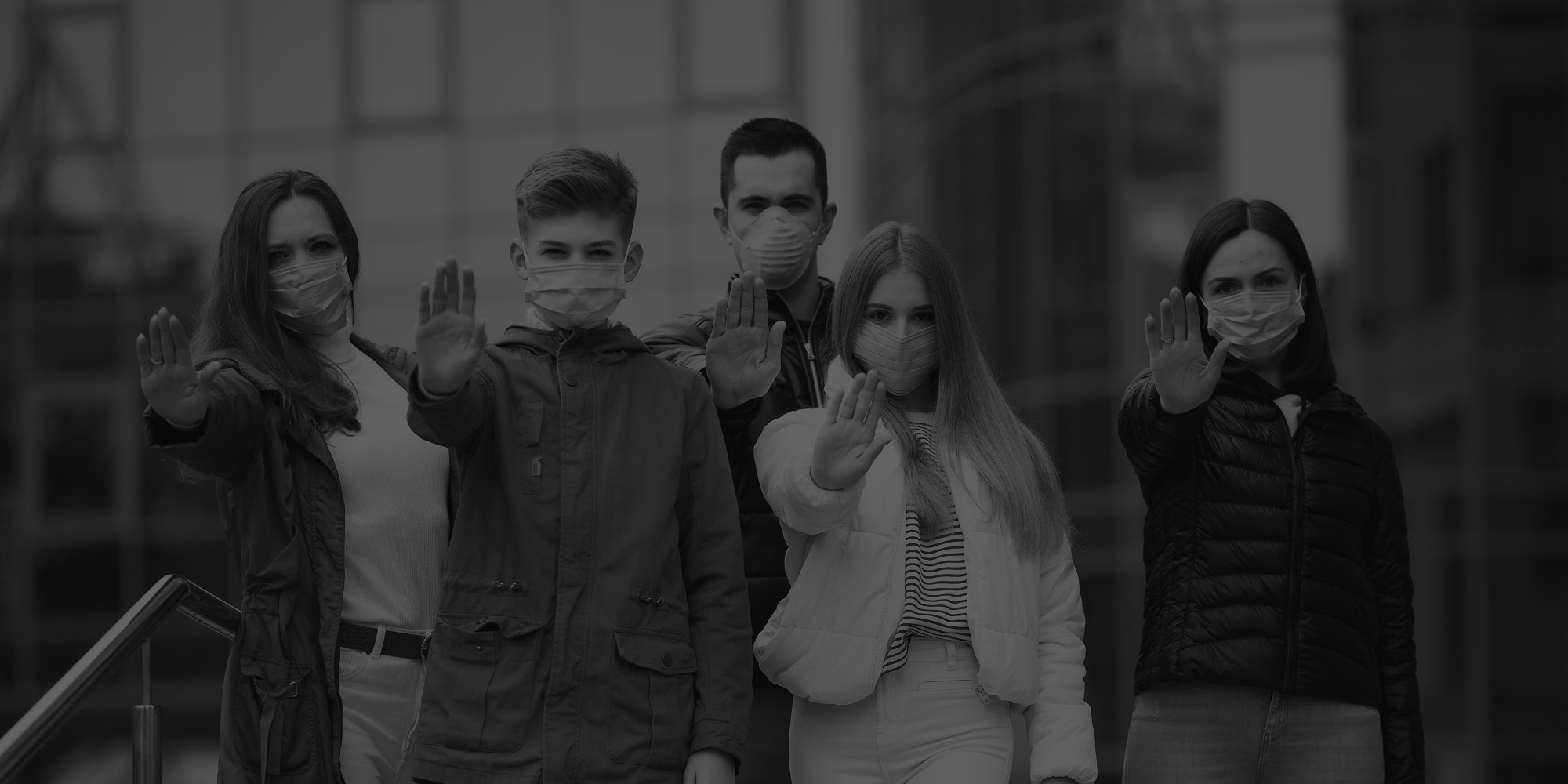 Airborne-mediated microbial diseases such as influenza and tuberculosis represent major public health challenges. A direct approach to prevent airborne transmission is the inactivation of airborne pathogens such as Coronavirus.

The airborne antimicrobial potential of UVC ultraviolet light has long been established; however, its widespread use in public settings is limited because conventional UVC light sources are both carcinogenic on skin and cataractogenic on eyes.

However, a breakthrough has proven that far-UVC light between 207 and 222 nm efficiently inactivates a virus without harming exposed mammalian skin. 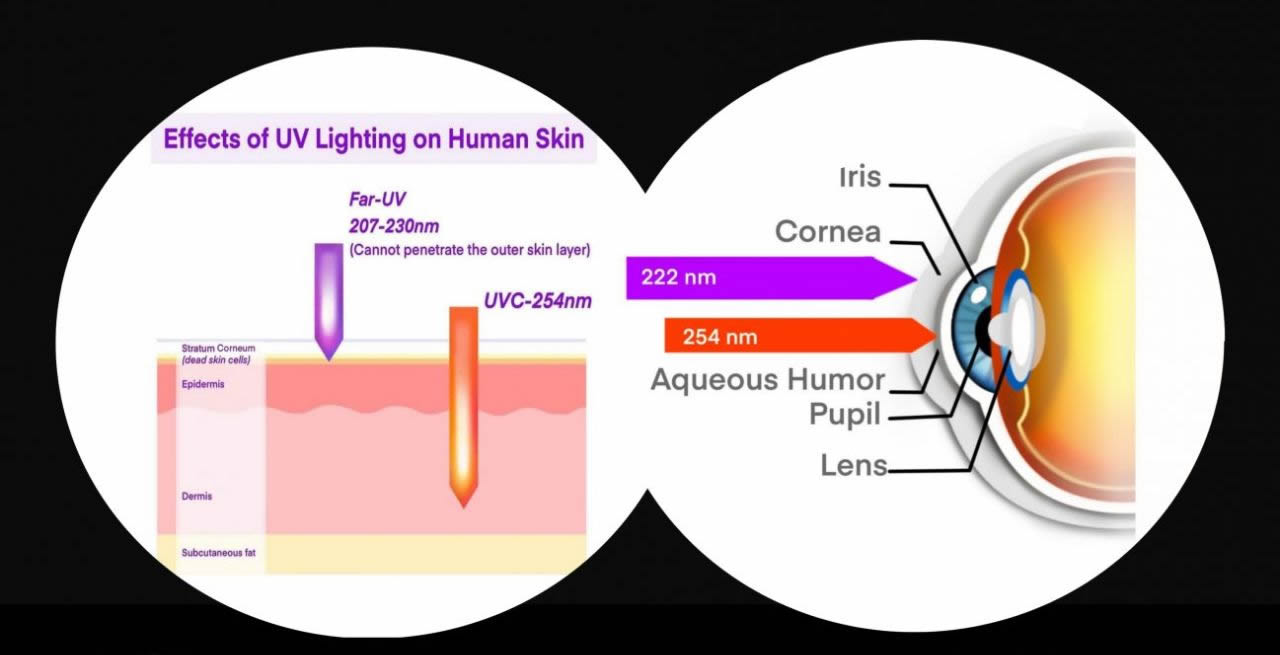 Far-UVC light cannot penetrate the outer (nonliving) layers of human skin or eye due to its strong absorbance in biological materials, however, because bacteria and viruses are of micrometer or smaller dimensions, Far-UVC can penetrate and inactivate them.

For the first time in human history, people can now use Far-UV light to safely and efficiently inactivate airborne aerosolized viruses. Studies have proven this can be done with a very low dose of only 2 mJ/cm2 filtered 222-nm Far-UV light; this was first proven to work by inactivating aerosolized H1N1 influenza virus by Dr. David Brenner at Columbia University Irving Medical Center. 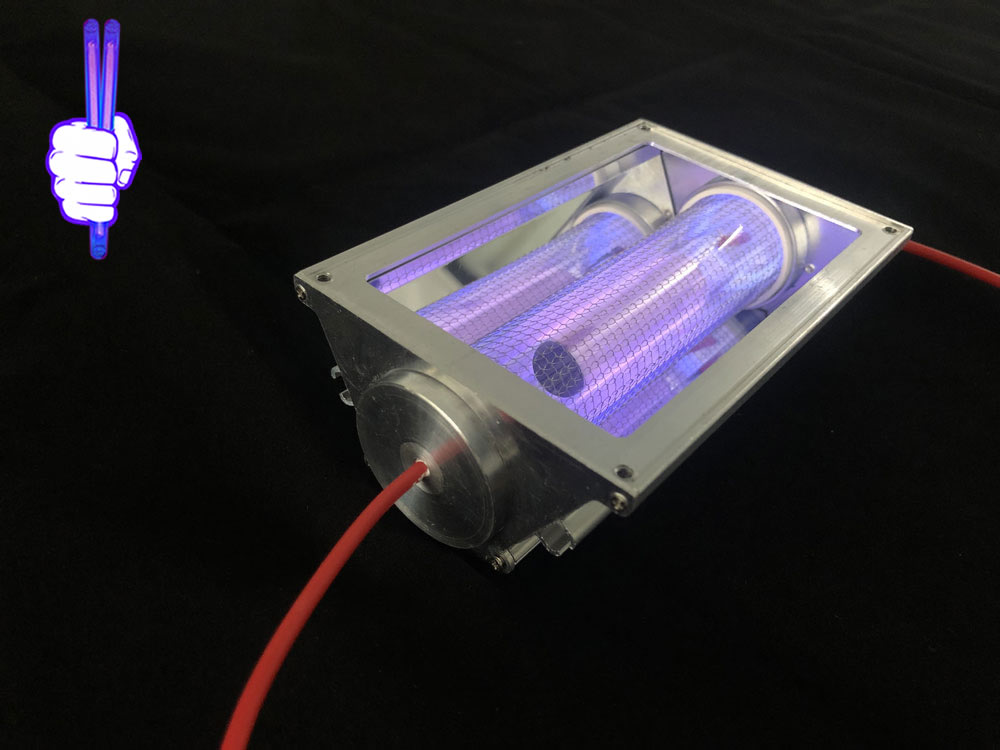 How to Get the Far-UVC Dose Right For AP-UVGI

Figuring out the right amount of Far-UVC power, filtering longer harmful wavelengths for occupied spaces and how to best design a Far-UV light system shouldn’t be left up to anyone that isn’t fully trained in Far-UV light disinfection technology.

A continuous, very low dose-rate of far-UV light in indoor public locations is a promising, safe, and inexpensive tool to reduce the spread of airborne-mediated microbial diseases.

2020 was a year of great despair, forcing us to reconsider the old ways. 2020 is also going down as the year outdated UVGI (Ultraviolet Germicidal Irradiation) technology made room for its predecessor — AP-UVGI (Active Personnel Ultraviolet Germicidal Irradiation) because this new AP-UVGI technology is completely safe for human occupants while destroying viruses in real-time in the presents of people.

The old way of using UVGI hasn’t changed much since its inception for the prevention of air-borne disease by Wells in the early 1900s. Quanta X Technology has made it a vigorous mission to finish the work of William Firth Wells who pioneered UVGI innovation 100 years ago which is still widely used today in health care settings.

We are certain if Wells were alive today, he would be shocked at the slow rate of innovation built on his discoveries using Germicidal Irradiation, that is, until now! AP-UVGI technology companies have innovated UVGI more in the past 12 months than has occurred over the last ten decades. Active Personnel Ultraviolet Germicidal Irradiation, or simply AP-UVGI, the substitution of human-safe Far-UV replacing conventional UVGI Germicidal UVC, is the most disruptive technology-based non-pharmaceutical pandemic countermeasure in human history.

Current UVGI depends on the use of UVC wavelengths that destroy RNA/DNA viruses and harm human cells too when exposed to the most commonly used mercury line 253.7nm UVGI wavelength.

The use of current UVGI makes an area inaccessible to people during a standard UVGI disinfection process.

It doesn’t take a rocket scientist to figure out air-borne transmission in empty rooms isn’t a threat, and with UVGI, when the people return to a disinfected space, the threat of airborne spread returns with them! AP-UVGI targets active bio-agent threats when there is a real risk of airborne spread in occupied spaces.

The higher frequency used in AP-UVGI technology increases the photons’ energy responsible for neutralizing airborne bio-hazards by order of magnitude over conventional UVGI. New AP-UVGI technology delivers these higher energy photons with a corresponding wavelength that studies have shown does not harm skin nor the eyes.

More precisely, within an infinite range of EM frequencies, the biggest advantage is that AP-UVGI uses a tiny “sweet spot” of EMR (Electromagnetic Radiation) completely safe for human exposure. This Far-UVC wavelength sweet spot that was found by Dr. David Brenner is located in an extremely narrow part of Far-UVC’s section of the electromagnetic spectrum between 207-222nm. Such a breakthrough now allows for Active Personal to be in the area being disinfected in real-time using only nature’s secret light waves revealed for extremely effective human-safe Ultraviolet Germicidal Irradiation. 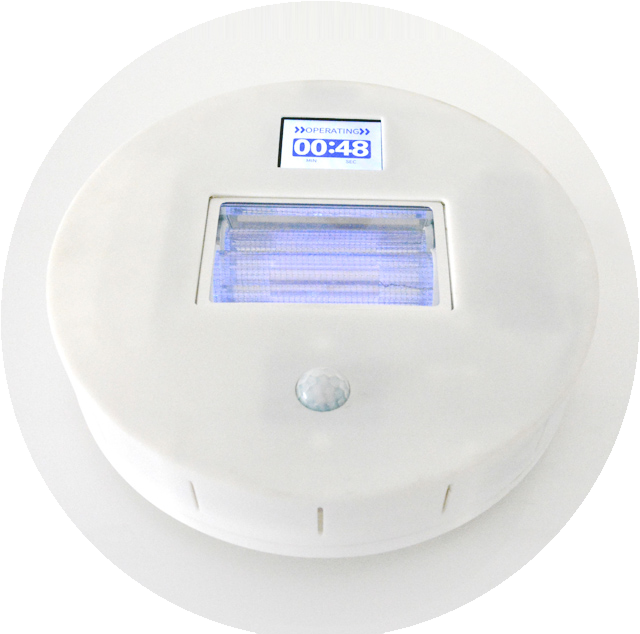 The most commonly used lights have a wavelength of 254 nanometers (nm), which has a relatively short UV wavelength—the so-called “C” category—but can penetrate the skin and eyes, leading to cancer and cataracts. For the past 4 years, a group led by physicist David Brenner at Columbia University Medical Center in New York City has tested shorter wavelengths, known as “far UVC light,” that can’t penetrate the outer layers of the eyes or skin. The researchers found that Far UVC eliminated bacteria on surfaces and did not harm lab mice. 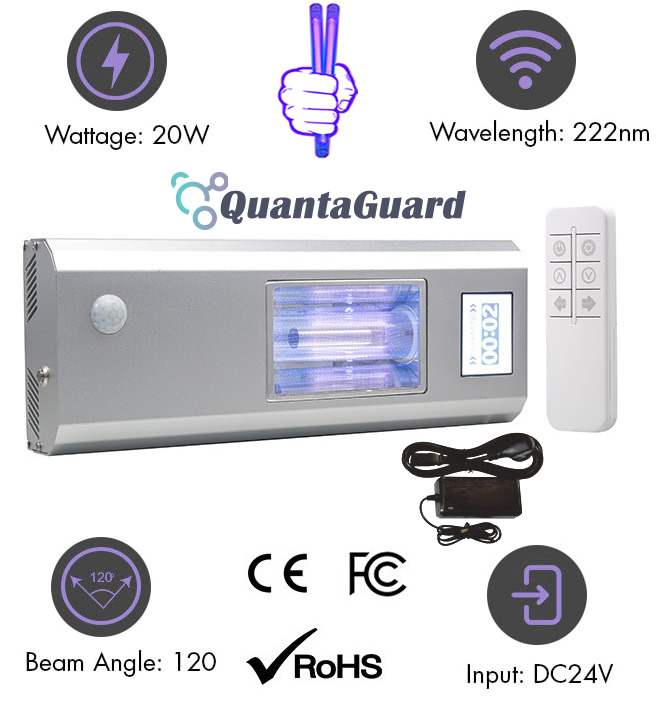 The invention increases the safety of both staff, patients, and their relatives by reducing the risk of contact with bacteria, viruses, and other harmful microorganisms. The concentrated Far-UV-C light emitted has a powerful yet very safe germicidal effect that removes virtually all airborne viruses and bacteria on a room’s surfaces. 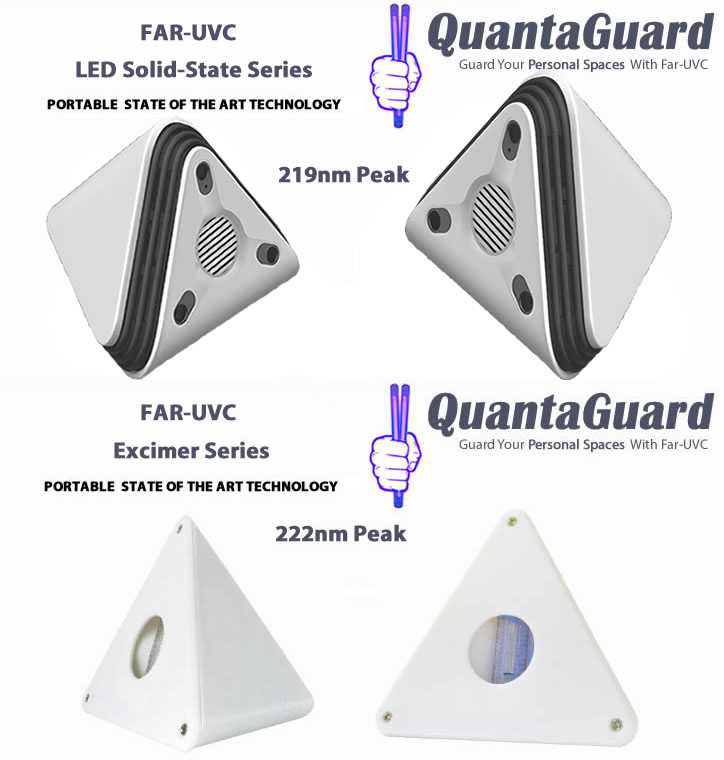 Make sure your Far-UVC choice is always QuantaGuard™ for all of your Far-UV lights!