This is just sickening. No pun intended! 3.5 million people are dead, and Far-UV Sterilray wants to restrict the sales and distribution of a life-saving wavelength of God-given light!

The people have God-given inalienable rights and pay good attention to the first one, “LIFE, Liberty, and The Pursuit of Happiness.”

This is way worse than patent-trolling or pandemic profiteering. Lives are at stake, you cold-hearted corporate BLANK BLANK BLANK. Are you too old to remember that you loved your grandparents?

The USA Government’s inaction to use large-scale FAR-UVC light countermeasures and the despicable actions of any American company that makes an effort to restrict any natural occurring quanta necessary for sustaining “Life, Liberty, and The Pursuit of Happiness.” is a gross injustice to “We The People,” and a violation of the law of our land.

Corporations and Governments must never be allowed to restrict access to a wavelength of 222nm electromagnetic radiation (EMR) necessary for sustaining life in times of crisis any more than it is acceptable to restrict air, water, or food no matter if produced through a natural means or mechanization when depriving an individual of naturally occurring electromagnetic quantal resources can result in death!

Individuals have both a right and a duty to preserve their own lives!

I believe that Sterilray deserves a lot of credit for exploring and developing ways to bring to light what nature was hiding! A great resource above the ozone necessary for all advanced life to avoid random genetic code changes from bio-agent threats, either natural or manufactured.

222nm EMR was hidden, not invented, and this is why government agencies worldwide control the use of the electromagnetic spectrum. It belongs to the people under the stewardship of elected officials!

222nm EMR is a natural quantal resource; instead of hidden like oil below the earth’s crust 15 km deep, it is in the ozone layer 15 km above the earth.

A quantum well works without a physical pipe reaching above the ozone layer for the same reason you don’t use two tin cans and a string for a cell phone. Each device independently creates electromagnetic fields that occur as the quantum fabric of nature itself.

You only own natural resources that you produce!

Had you created the first oil well, would you own all the oil inside the earth? You don’t own what the Heavens gave us!

The only way I could ever support a company is to see a willingness to protect people’s lives before demonstrating pathetic greediness to milk every cent of profit out of a licensing deal!

I don’t disagree KrCl bulbs, flat, or tubes have peaks of concern that need filtering, and withholding such information from the public is wrong.

I did a press release on this a couple of months ago because so many companies claim that unfiltered sources of Far UV are human-safe.

The reason it took as long as it did to uncover the amazing properties of 222nm wasn’t the bulb or fixture inventions used but the bandpass filtering of longer wavelengths.

So I have no problem not selling 222nm lamps in the USA marketplace until I’ve figured out your game of shame. That won’t prevent me from informing people around the world about Far UV options available everywhere else. Except for the USA, all because an American company on an IP power trip would rather Americans suffocate alone with fluid-filled lungs than working together through a crisis!

How do you brothers sleep at night choking America?

Just one more thing, Nesters, if you have a soul between you both refashion your statements concerning pennies, as you put it, for licensing rights – at least for the period of time during our current pandemic crisis.

A pandemic licensing special seems like the only humane thing to do!

Sure 30 years ago, any publicity was good publicity, but maybe you have forgotten the cancel culture we live in today.

Lawsuits that expose ruthless greed while others like Healthe Inc offered money to make this technology more readily available to the public to save lives is just disappointing.

I propose you do the right thing, license your technology for the pennies you so disagreed with until victory has been claimed over our war on flu! It works for you in every way!

More people adopt and offer your technology as the world quickly sees the amazing impact 222nm has as it is incorporated into indoor public places. More people actively behind regulatory changes, medical research, and product Research and Development to implement Far-UV into our lives in ways not yet imagined.

Give the world a chance to get out of a war with the microscopic realm before enforcing a fair market value on start-ups fighting a pandemic! Not all start-ups are well-capitalized in Far-UV, but we are determined to bring its powerful revelations to light.

The words “let there be light” are some of the first divine words in the Bible!

It is incomprehensible that anyone would remain quiet while you try to impose unreasonable ownership conditions on God-given light! 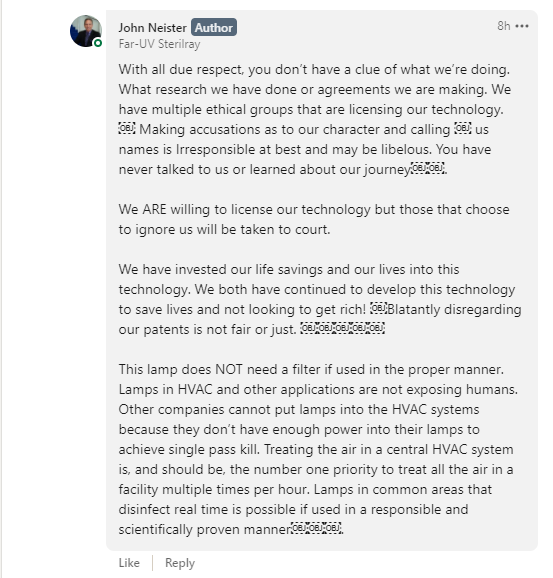 I have more of a clue what you are doing than you think. Actions speak louder than words! I realized what you were doing back in February 2020 when you exchanged similar words with my CTO. Both spoken and written! A name you might not remember, perhaps.

A name without an “I,” Coates, John Coates, the father of my daughter and CTO of my company, greatly influences my decisions. Because it’s memorial day weekend, I’ll mention that Coates is a name also known for being one of 64 men who received the first Medals of Honor for actions during the Battle of Gettysburg.

The heritage of the name hasn’t changed any over the generations. Coates’ fight to protect “Life, Liberty and the Pursuit of Happiness.” Just as Jefferson Coates continued fighting on even after having both eyes shot out on July 1, 1863, to ensure all people are entitled to their unalienable rights.

The United States Declaration of Independence says unalienable rights have been given to all humans by their creator.

Access to life-saving wavelengths of light that occur in nature, I feel, qualifies as one of the natural, unalienable rights that governments are created to protect and our forefathers shed their blood for us to have. No masters control another human’s natural rights, resulting in the loss of “Life, Liberty and the Pursuit of Happiness”!

I will continue this fight today using my God-given First Amendment rights protected by the U.S. Constitution!

Nothing will stop us from showing people the health benefits of filtered 222nm light. Our QuantaDose test cards turn invisible FAR-UV into visible light, and I plan to crusade on the importance of these wavelengths being implemented into people’s lives without a master!

Your HVAC argument is true but irrelevant in this discussion! Poor strawman attempt! You aren’t in legal battles with any HVAC companies. So why are you talking about HVAC companies?

Regular UVC bulbs are fine in these HVAC applications until the prices come down to incorporate 222nm in unoccupied spaces.

Only a Ne·i·ster would suggest replacing a 30 dollar UVC bulb with a 300 dollar Far-UVC bulb when it will make little difference.

So who benefits from talking someone into an HVAC UV system with 10x the cost to incorporate Far-UV? I can’t wait to meet the person that gets Ne·i·stered into that one!

The true benefit of 222nm Far-UV is for use around Active Personnel UVGI (AP-UVGI).

The science is in on AP-UVGI (Active Personnel Ultraviolet Germicidal Irradiation), and filtering longer wavelengths is a requirement, not an option for occupied spaces! Don’t confuse the two. There aren’t people hanging out inside of a ventilation system!

“we will protect our rights that has taken over 15 torturous years to develop! Patents Matter!” – Far-UV Sterilray

Yes, patents matter, everything matters, and some things matter more than others! What matters the most is what really matters! LIVES MATTER!

Protecting a claim to IP rights doesn’t make you look greedy! Your ongoing caseload does that with statements you made as counterclaims.

You have signed four groups/companies up for licensing since the pandemic started? What the heck are you doing?

Why are you shooting for only a letter of intent for one new company each business quarter?

I don’t even make Far-UV bulbs, and I could sign up one new company a week just selling Far-UV detection cards!

Do you want to know what I take great offense to in your statements?

Your insinuation that your “15 torturous years” somehow entitles you to claim to suffer at a degree that rivals what our African American brothers and sisters have suffered at the hands of others. You are piggybacking on “Black Lives Matter” with “Patents Matter”! That is beyond disgusting to think so selfishly!

I’m not your lawyer, but public debate might not be your thing.

The real you is shining through like Far-UVC 222nm light through a cloud of coronavirus!

Drop your use of Patents Matter on closing! To use this phrase to compare suffering inflicted on black lives matters! Closing your statement like this is waving it like a flag!

I’ll say it one more time; to be clear, drop the “Patents Matter” BS! Fight whatever legal cases you want but don’t compare your struggles as one of the whitest people alive to the suffering people of color have endured.

Congratulations Ne·i·ster, you just made a tough choice easy because I wouldn’t sell any bulbs you profited from if you paid me to take them! My family would eat dirt first!

John Neister Sorry to disappoint you. Linkedin comments only allow 1250 characters, and the comment was 1251, so I removed a letter that I figured you would comment on knowing the pathology here.

There is no “I” in teamwork, but there is a very big “I” in Ne·i·ster. I knew you’d notice…lol! Why? Because anyone would have to be much more than blind not to see the “I” in Ne··ster even when removed!

On the whole wavelength ownership thing – is it a coincidence that nature gave these words a wavelength pattern > 50% similar to each other – ne·i·ster and sh·y·ster.

Any scientist can recognize a greater than fifty-percent similarity in wave function here. I’d never contest this! I’m not by any means saying the two words have anything in common other than sounds are waves in nature too, and a ne·i·ster lays claims to own waves in nature decorated by patent law.

Nature does funny things with waves at times, and similarities in wavelength patterns sometimes solve the greatest mysteries. The quantum world of waves belongs to all humanity because nature’s EMR waves have no earthly master. Nature’s wavefunctions are a gift we borrow that belongs inherently to only God almighty.

God said let the be light!

The Lord mentions light is good too but never mentioned a licensing fee!

In God We Trust!

What? The Ne·i·ster’s Investors want their money back!

Plaintiff The North Carolina Eye Bank, Inc. d/b/a Miracles In Sight (“MIS”), is a North Carolina non-profit corporation, Defendant HEO3 is a New Hampshire limited liability company, S. Edward Neister is a citizen of New Hampshire, and John Neister is a citizen of Massachusetts. (Compl.1-4, Docket Entry 1 at 2.) Since Plaintiff seeks recovery of its $ 2 million investment in HEO3, along with other compensatory and punitive damages, the $75,000 amount in controversy required by 28 U.S.C. § 1332 is also satisfied. 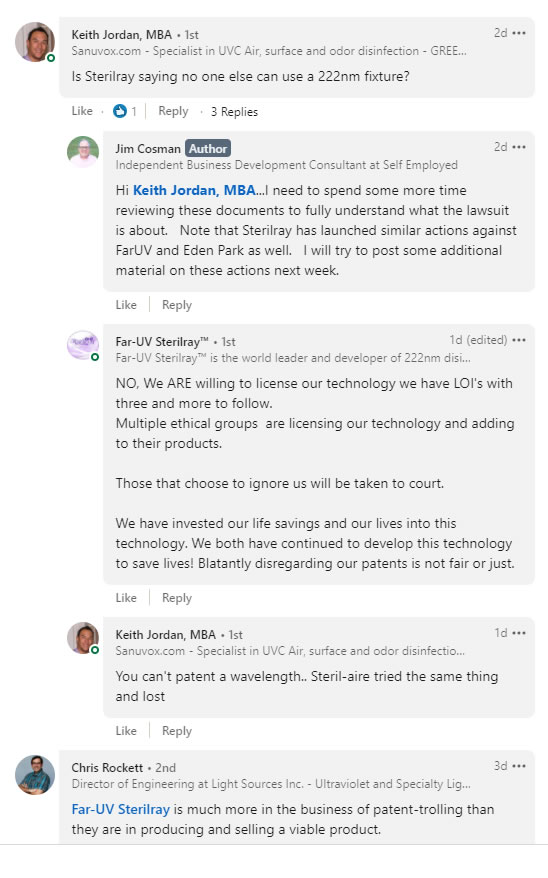