There are three main types of UVC test cards on the market today. With the three of them come three very important and very distinctive aspects between these UVC measurement cards:

Each of these three distinctive aspects of UVGI play a vital roll in determining very critical considerations in choosing effective sanitization lighting options and getting the most effective UVC dosage to areas you have targeted for sanitization.

Measurements of these three aspects of UVC radiation include its intensity, accumulative dose and optimal UVC wavelength which are all critical detection factors of knowledge that will aid in the best UVC disinfection process.

At this minimum confirmed intensity of UVC exposure from a reusable rapid intensity gauge reveals that a costly irreversible 100 mJ/cm² UVC dosimeter test card will reach full color concentration in under 5 minutes. Notice the QuantaDose will not display the word “ULTRAVIOLET” until the UVC meter hits 300 µW/cm²! It’s a long 5 minutes watching a dosimeter test card change color between 250-350 µW/cm², enjoy the sound of the waterfall!

Expensive irreversible UVC test cards are made by many companies that target health care providers to provide a final conformation of an adequate UVC power level reaching a surface over the entire time of the disinfection process. These irreversible UVC test cards are rated in 25/50/100 mJ/cm² for accumulative dosage rather than real-time intensity.

This is a very important final conformation, but it is not practical to waste a irreversible one-time use card that could cost you over 10 dollars depending on where you by it, just to test a product you could have only spent 10 dollars on.

This is where the rapid and reusable 300 µW/cm² minimum intensity conformation for real-time power intensity readings used by QuantaDose for testing rapid UVC disinfection times becomes a very cost effective solution for end-consumers over costly single use UVC test cards on the market.

What does a UVC dosimeter test card measure? These one time use cards are very effective in measuring “the accumulative exposure to a surface” over a variable amount of time.

The most popular UVC Dosimeter Cards feature a yellow indicator, surrounded by two reference colors (orange and pink) to indicate UVGI doses of 50 and 100 mJ/cm². They have an adhesive strip and write-in areas to capture date, time, operator name as well as location of card placement to document each UVC disinfection cycle.

You see a lot of people spending money a lot of money on single use UVC dosage cards on ebay just to find out it makes no color change at all. Many ineffective UVC sanitizers are very low power devices without straight line-of-sight UVGI irradiation hitting target areas. A prime example of this are cheap phone sanitizers.

Here’s how accumulated dosage works with an under-powered UV sanitation device. Assuming the top of what you were cleaning received 13 microWatts /cm^2 average intensity to target area where the device runs for 3 minutes (180 sec) per cycle, One cycle would result in….013*180 = 2.34 milliWattsec/cm^2. Thus, to reach 50 mWsec/cm^2, you would need to turn on the sanitizer device 22 times in a row. And, to reach 100mWsec/cm^2, you would need almost 43 cycles.

Inherently a reusable QuantaDose UVC test card could have given you the same result simply because the sanitizer never reached 300 µW/cm. This makes a huge difference, with results in 15 seconds, QuantaDose reusable intensity cards have the capability of testing hundreds more devices with the same 10 dollars spent 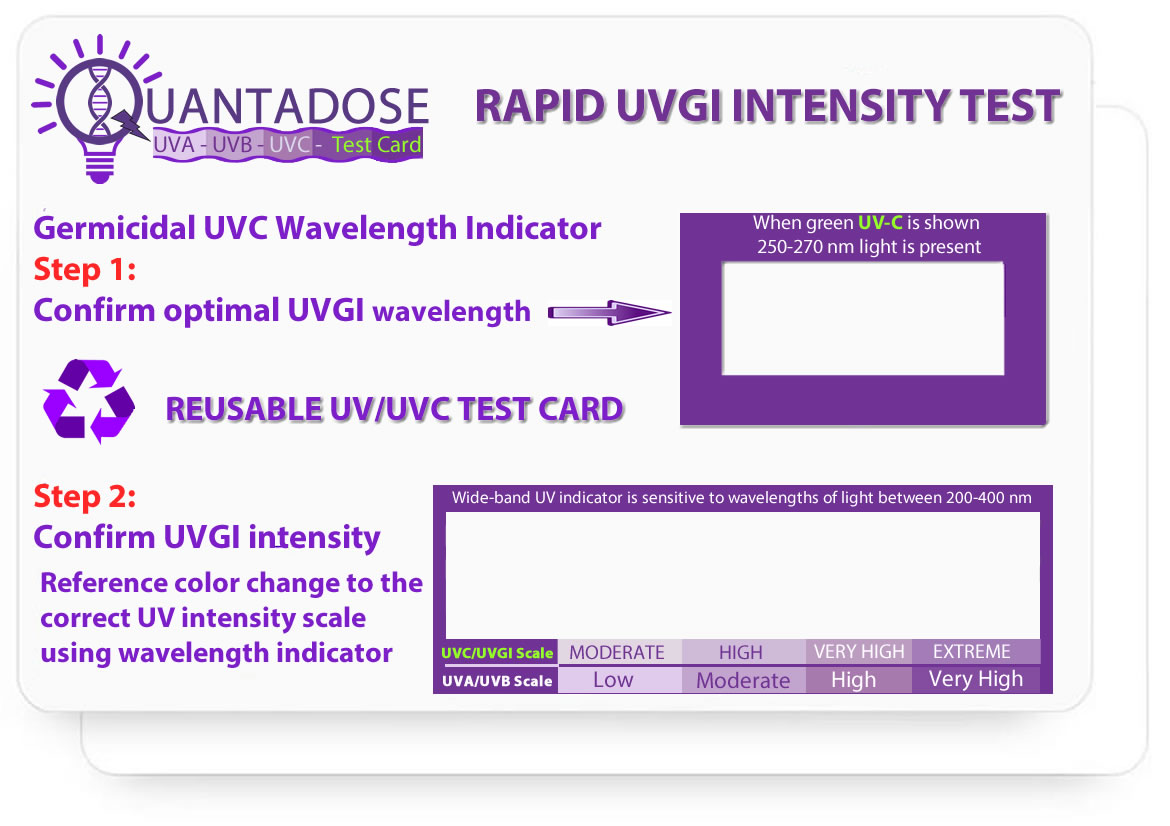 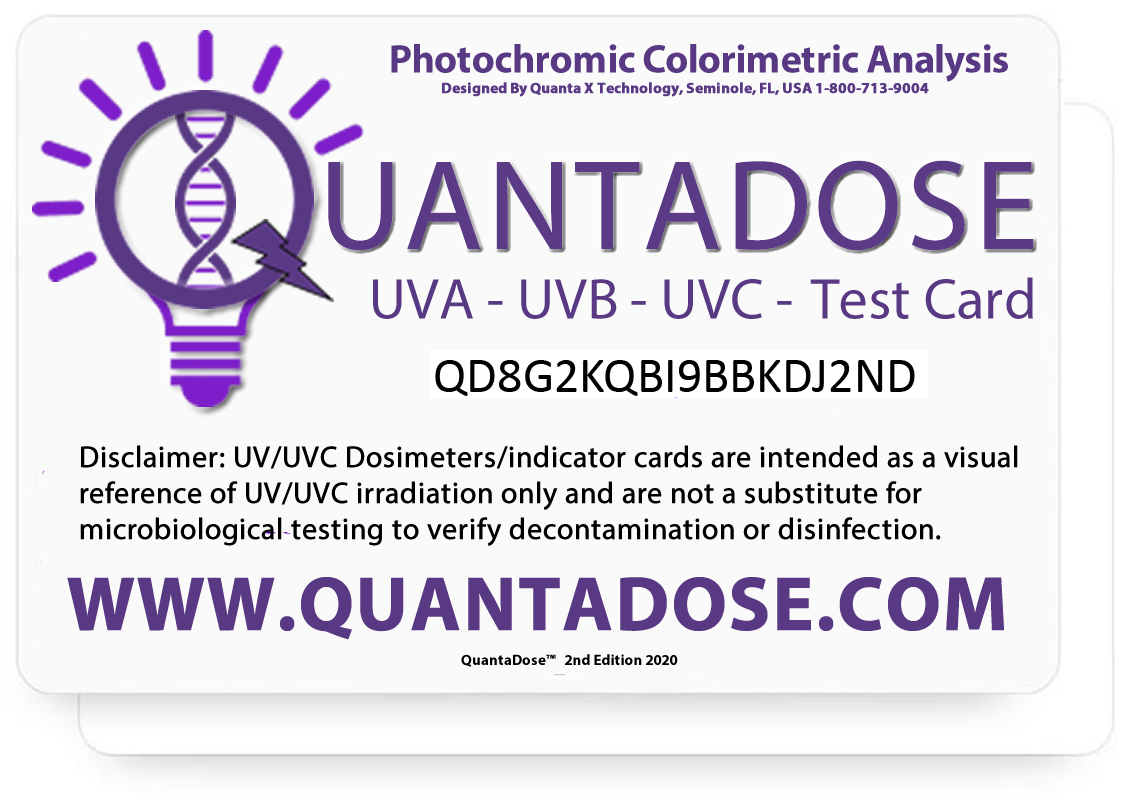 QuantaDose® UVC test cards are a pre-calibrated UVC light wavelength and intensity instrument to get a rapid visual reference of both UVC intensity and UVC wavelength that is being used with UVC test results completed in only seconds!

It is important that the lower UVC intensity gauge is used in tandem with the top wavelength indicator to confirm that you measure UVC intensity from a real source of UV-C wavelength light. This part of the test is instant! The glowing letters “UV-C” will only glow when exposed to 250-270 nm -+ 5 nm indicating the wavelength is germicidal – this is not indicative of power or intensity. This is measured in the lower test card area.

Only after seeing the instant pre-calibrated UVC wavelength reaction on the UVC test cards top UV-C wavelength Indicator. Represented by the letters “UV-C” glowing brightly. This confirms the detection of light between 250-270 nm -+ 5 nm.

Now that UVC wavelength is confirmed, the next step is UVC intensity testing, this is the most helpful part of the UV test card. This informs you if the UVC intensity is powerful enough to disinfect over the time-frame you require.

Besides creating breakthrough wide-band reversible analytes, the biggest breakthrough came in the form of a simple inverted word. This inverted word turned out to be the most important part of visualizing UVC intensity test card calibration points, and confirmation of reaching a pre-calibrated UVC intensity level of 300 µW/cm² to reference for UVC dosage calculations.

The UVC Test card’s photochromic color change exhibits a reversible UV/UVC intensity gauge that first displays the word ULTRAVIOLET at 300 µW/cm². When we were designing the QuantaDose® we had to ensure the accuracy of visualizing closely calibrated UVC intensity levels for meaningful reference.

What we found was that everyone could perceive shades of colors very differently when dealing with light colors with little differences between shades, but big differences in intensity between these shades.

Yet, a word always becomes visible to everyone’s eyes at about the same time providing your vision is good enough to drive a car legally.

This is why QuantaDose® has chosen word visibility over color differentials to visualize UVC at a minimum calibrated UVC intensity level of at 300 µW/cm² when the word ULTRAVIOLET becomes visible under a confirmed UVC wavelength of 250-270 nm.

For consumers that purchase this product for a single time use to test a UVC light product, We have boxed in our wide-band UV analyte to include a UV sun gauge, so the card continues to be useful.

This product has many uses! Initially designed for fully protected UV light installers, UV sanitation workers, and homeowners to quickly visualize their UVC disinfection grid for the fastest, most effective UV lamp set up time.

Now millions of consumers that have purchased UVC products have a cheap and easy way to see if what they paid for is UVGI that a hospital would trust for rapid disinfection in under 10 minutes. The world’s only UVGI rapid test intensity test card.

QuantaDose® professional-grade reversible UVC test cards are not designed to replace medical-grade irreversible photochromic pigment cards, QuantaDose® is a quick reference tool to help prevent waste of expensive single-use UVC dosage cards with an early indication before going through the time of running through a full cycle!

While it is not difficult to calculate dosage when you know intensity at any given distance from the UV source.

We highly suggest irreversible UVC test cards should be used for confirming 50 and 100 mJ/cm² accumulative exposure dosage over the entire time of the UVGI disinfection process for either commercial or home environments as final confirmation. 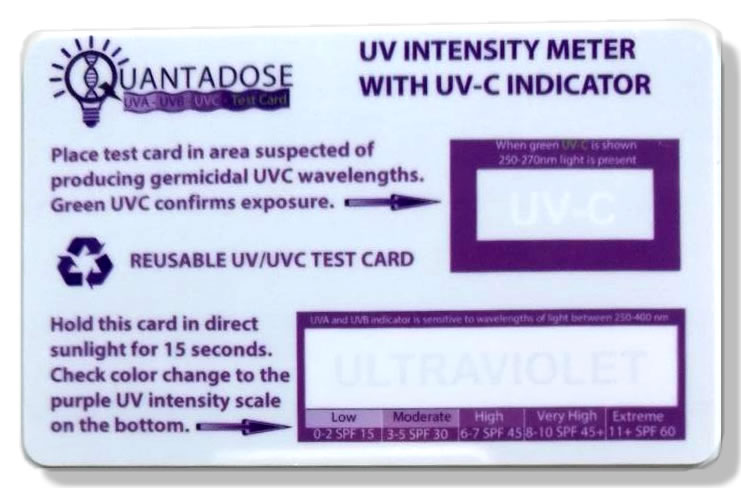 QuantaDose® minimum intensity readings give you the ability to calculate dosage at any given distance, it is even very helpful under reflective conditions.

When you know the UVC intensity at any giving point of known distance, QuantaDose® can provide the necessary variables needed to calculate accumulated dosage overtime at different distances.

The video clearly shows UVGI wavelength and the minimum of 300 µW/cm² was confirmed by QuantaDose® intensity gauge for rapid disinfection.

At the distance seen, the 35-watt UVC bulb peaked at 350 µW/cm² at full operating temperature. Notice QuantaDose® color when exposure reaches 300 µW/cm² as the bulb warms up to reach the minimum intensity for a color reaction to occur.

At this intensity, a 100 mJ/cm² accumulative exposure is reached in 5 minutes as confirmed with American Ultraviolet’s UVC Dosimeters by Intellego Technologies and the real-time readings in µW/cm² are provided with a General Tools UV512C UVC light meter.

Start increasing the efficiency of UVC light disinfection and UV safety with a new visual perspective!

QuantaDose® UVC test cards are reusable but not invincible, over time photochromic analytes will degrade from high energy UV exposure.

QuantaDose® offers a package for UVC installers and the avid UVC light tester, it includes 5 QuantaDose®UVC test cards and a FREE 3 Watt UVC light wand for UVC test card calibration. By simply holding a 3 watt light one inch away will advise you if your card is still suitable for UVGI intensity testing.

READY FOR WHAT YOU SHOULDN’T USE

Several people (third party sellers on popular sites sell this as stand alone conformation that your UVC light is working to destroy viruses. This is false! More about that here, fake UVC test cards

These are currency watermark pigments in quality products like QuantaDose, and China also has a lot of the short-wave counterfeit green UVC ink to help promote their counterfeit UVC lights.

The reason this is important to understand is that this type of knock-off ink will glow even when power is below .001 µW/cm. The only thing this ink is confirming is a virus can be as safe as you are at the beach with 60.

Never use wavelength indicator ink to do anything but confirm that the wavelength is within UVGI range. To repeat, this style so-called UVC test card can not help you determine intensity or dosage as being effective. Buyers MUST beware of the misuse of this ink sold as a stand alone product claiming to provide UVC testing for your devices! 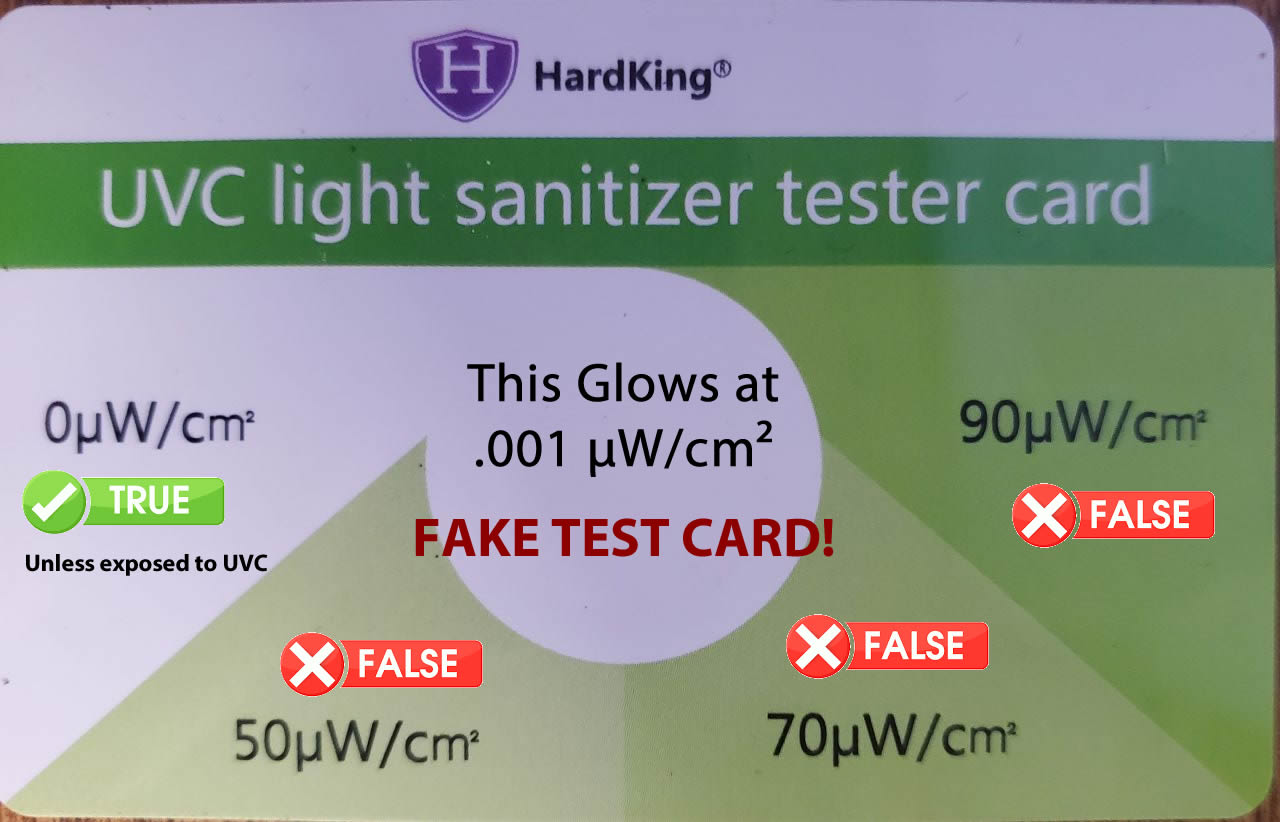 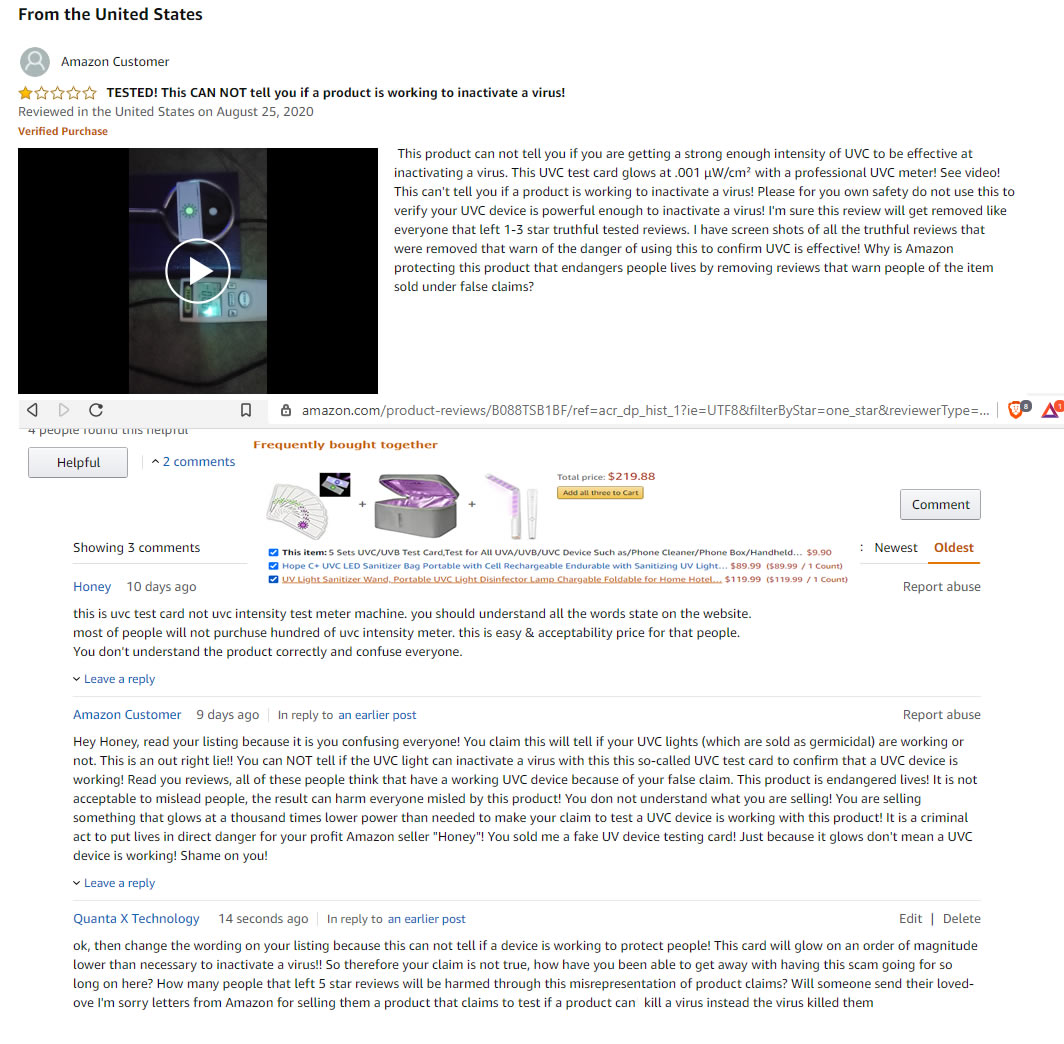 SCAM UVC LIGHTS TOO!
HOW TO TEST A UVC LIGHT?

We just found this YouTube Video of a company exposing a fake UVC light using QuantaDose! Anyone that takes the time to make a quick youtube video that exposes a fake UVC light with a QuantaDose purchased from this site, just send us a link to get a free QuantaDose! Get involved to directly help consumers easily identify fake UVC lights! Please always make sure you use full UV protection for skin and eyes when exposed to UVC light!